Femtosecond Lasers: An Opportunity for the Anti-Counterfeiting Industry 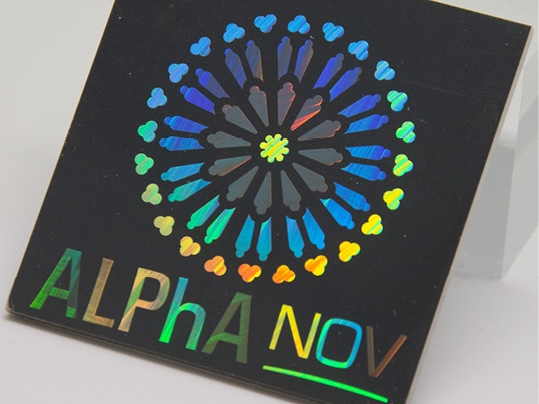 Femtosecond Lasers: An Opportunity for the Anti-Counterfeiting Industry

Following the results of the H2020 "Laser4Fun" project, industrial femtosecond lasers are being incorporated into the field of anti-counterfeiting with some very promising innovations.

During the production of devices used for anti-counterfeiting, manufacturing methods such as ion or electron beam etching are often used. These techniques enable the generation of surface structures on a nanometric scale with very fine and detailed morphologies. However, they are still very expensive and have very long cycle times. Today, femtosecond laser technology offers a very promising alternative, capable of significantly increasing productivity while reducing costs.

At the end of the “Laser4Fun” project (Marie Curie Action H2020), ALPhANOV showed that mastering polarization control and time delay techniques between femtosecond pulses could allow the fabrication of nanometric, periodic structures at one (1D-LIPSS Laser Induced Periodic Surface Structures) and two dimensions (2D-LIPSS), useful for manufacturing holograms on an industrial scale.

Wavelets with a variable periodicity between 200nm and 800nm, bumps of approximately 200nm, as well as squares, diamonds and triangles of approximately 800nm were all produced on surfaces of varying sizes between a few tens of μm² and a few cm². However, the cycle time remains very short: only a few minutes per cm². In addition, thanks to the use of galvanometric scanners, it is possible to combine the different morphologies and produce an almost infinite number of patterns.

This makes it possible to obtain a light scattering effect on several axes of symmetry, and even in cylindrical symmetry. Different metals have been machined such as steel, molybdenum and nickel with thicknesses varying between 10µm and several millimetres.