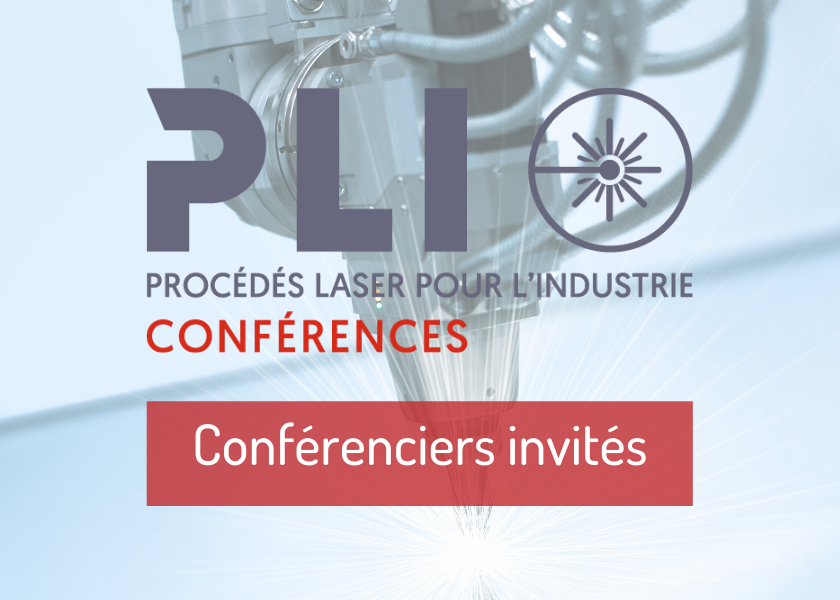 The Club Laser & Procédés is delighted to announce you the invited speakers for PLI Conference 2019 !

Christophe ARNAUD is a laser processing specialist for Solutions NOVIKA in Quebec – Canada. He studied in Laser, Optic and Photonics in France and has 17 years of experience in laser processing. M. ARNAUD has worked on CW and long pulse laser to develop laser welding of aluminum alloys (6xxx series) by multi-beam and by oscillating beam. He wrote technical papers dealing with laser polishing, laser structuring by remelting and laser additive manufacturing by wire-based metal deposition. On the other hand, he worked on short pulse laser and ultrashort pulse laser for laser composite machining, laser texturing and micromachining. He collaborated onto many projects and his skills in programming and integration led to a fully laser-based automated production of car for disabled people (laser retro-conception and machining) during LASHARE II project (SCALP).

Didier Boisselier is specialized in laser applications applied on material treatment. He has been working in this field since 1985 at IREPA LASER, and has been in charge of the development of new laser applications (laser welding, soldering, and Laser Additive Manufacturing). He managed several European R&D projects, among them the first development of a Laser Metal Deposition process that gave the CLAD® process in 2007.  He directed the development of new machines and software dedicated for LMD-CLAD® application that led to the creation of the BeAM company in 2012. He is now in charge of Additive Manufacturing development at IREPA LASER.

Prof. Dr. Bernabé Cárcel González. Degree in Materials Engineering, Doctor (PhD) in Mechanical and Materials Engineering by the Universitat Politecnica de Valencia. Co-founder and Chief Technology Officer in Tecnoclad Laser Solutions, company founded in 2016 and focused on different services related with laser processing of materials. From 2007 to 2015 he worked as project manager in AIDO Optics Institute, participating on several research projects in the field of both micro and macro laser technologies. From 2012 he holds a position as Associated Professor in the area of materials engineering and materials science at the Universitat Politècnica de València (Spain). He has published more than 10 scientific papers and participated in several congresses and conferences in the field of laser technologies.

Maxime Chambonneau was born in 1988 in Poitiers (France). He obtained his engineering and master degree in Mathematical and Mechanical Modeling in 2011 at the ENSEIRB-MATMECA engineering school in Bordeaux (France). He obtained his PhD degree in Optics, Photonics and Image Processing from Aix-Marseille University in 2014. His PhD thesis deals with laser-induced damage in fused silica under multi-wavelength irradiations in the nanosecond regime and was carried out at CEA-CESTA in Le Barp (France). He worked as a post-doctoral researcher at LP3 laboratory in Marseille (France) from 2015 to 2016 on the femtosecond-laser–silicon interaction for applications in security of microelectronic devices. Then, he worked as a research engineer at the SATT Sud-Est in Marseille (France) from 2017 to 2018 on the laser functionalization of silicon with nanosecond pulses. From 2018, he works at the Institute of Applied Physics in Jena (Germany) on mid-infrared-laser–semiconductor interaction.

Over the past 11 years Dr Jack Gabzdyl has held numerous roles at SPI Lasers with the most recent being VP of Marketing & Business Development. Jack has 33 years of industrial laser materials processing experience and has been widely published with over 60 technical conference papers and articles/publications. He is currently responsible for laser materials processing applications development at SPI. Jack has a degree in Metallurgy and Materials Science and obtained a PhD in Laser Material Processing from Imperial College London in 1989, focusing on laser cutting. Through his career Jack has been actively involved in the wider promotion of laser technology having been chair of the UK ‘Make it With Laser’ programme, UK delegate to the IIW and a committee member of AILU. His contribution has recently been recognised by his election as a Fellow of the Laser Institute of America (LIA).

Florent Husson, 26yo, Studied a Master Material Science in La Rochelle University (2016). I have been working in the aeronautical field for 2 years in Ireland before ALPhANOV on the laser cladding for critical plane engine parts. Working with different type of laser in a Research and Development environment has only started with when I integrated the Mesoscale laser processing team in AlphaNov in February 2019.

- Gladys MINGUEZ VEGA - JAUME UNIVERSITY : « Towards the scale-up of the synthesis of nanoparticles in liquids by pulsed lasers »

Gladys Mínguez-Vega (ORCID ID: 0000-0003-4994-1859 and Scopus ID: 6602370066) is Associate Professor of Optics in the Universitat Jaume I of Castellón (Spain). She received the B.Sc. and Ph.D. degrees in Physics from the University of Valencia (Spain) in 1997 and 2002, respectively. She has done research in different international centres as the Purdue University (EEUU), the Fernuniversität in Hagen (Germany), Centro de Investigaciones en Óptica (Mexico) and the Applied Optics Institute (Poland). At present, she is secretary of the Physics Department at the University Jaume I and co-leads the photonics research group “Grupo de Investigación de Óptica de Castellón, GROC•UJI”. Currently, she works in the laser-assisted synthesis of nanoparticles. This alternative eco-friendly method provides high-pureness and ligand-free nanoparticles that can be synthetized from almost any base material. She is interested in the development of promising advance materials with bactericidal properties, optical biosensing capabilities, drug-delivery, and the fabrication of nanofluids for harvesting solar energy.

Dr. Konstantin Mishchik, graduated from the Moscow Institute of Physics and Technology, got his PhD at the University of Saint Etienne in 2012. During his doctorate and two subsequent postdocs at CNRS and University of Bordeaux he has studied effects femtoseconds laser writing in silicate and photosensitive glasses aiming to laser 3D manufacturing of linear and nonlinear optical functions for integrated photonics, and then, have developed femtosecond laser glass cutting and welding. Now he is working in Amplitde Systemes as a Laser Applications Scientist to deepen the understanding of ultrafast laser interaction with transparent media, as well as the development of fs applications with innovative laser sources.

See you on July 1st and 2nd in Liege - Belgium.

>> Register to the conference